I'm part of the Music in Canada @ 150 Wikimedia project, organizing wiki edit-a-thons across Canada to help improve the presence of Canadian music and musicians in projects like Wikpedia, Wikidata, and Wikimedia Commons. It's going to be awesome, and it's why I invested time in developing and delivering the Wikidata for Librarians presentation at the CAML preconference.

Right now I'm at the Wikimania 2017 conference, because it is being held in Montréal--just down the road from me when you consider it is an international affair. The first two days were almost entirely devoted to a massive hackathon consisting of hundreds of participants with a very welcoming, friendly ambiance. It was inspiring, and I participated in several activities:

But I also had the itch to revisit and enhance the JavaScript widget that runs in our Evergreen catalogue which delivers on-demand cards of additional metadata about contributors to recorded works. I had originally developed the widget as a proof-of-concept for the potential value to cultural institutions of contributing data to Wikidata--bearing in mind a challenge put to the room at an Evergreen 2017 conference session that asked what tangible value linked open data offers--but it was quite limited:

So I spent some of my hackathon time (and some extra time stolen from various sessions) fixing those problems--so now, when you look at the catalogue record for a musical recording by the most excellent Canadian band Rush, you will find that each of the contributors to the album has a musical note (♩) which, when clicked, displays a card based on the data returned from Wikidata using a SPARQL query matching the contributor's name (limited in scope to bands and musicians to avoid too many ambiguous results). 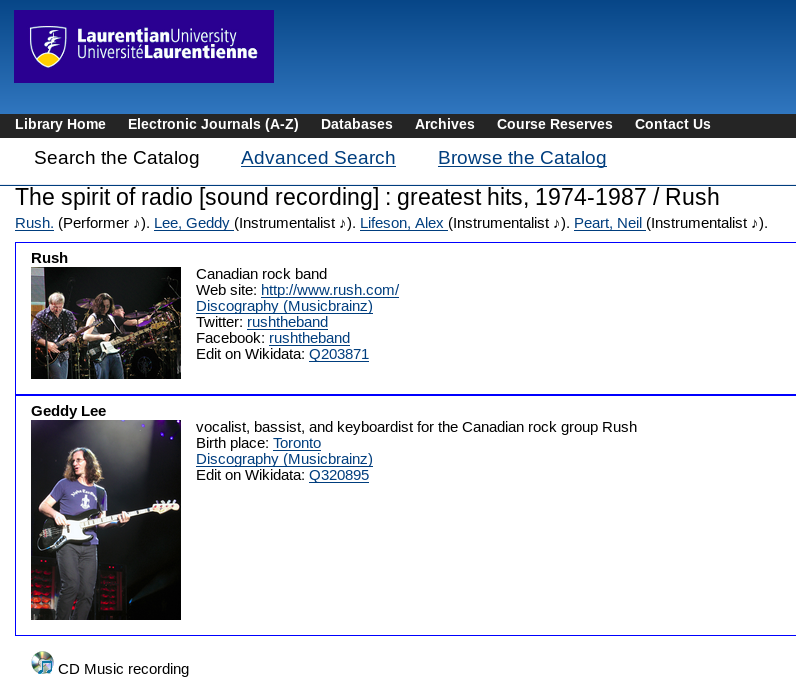 I'm not done yet: the design is still very basic, but I'm happier about the code quality and it now supports queries for all of the contributors to a given album. It is also licensed for reuse under the GPL version 2 or later license, so as long as you can load the script in your catalogue and tweak a few CSS query selector statements to identify where the script should find contributor names and where it should place the cards, it should theoretically be usable in any catalogue of musical recordings. And with the clear "Edit on Wikidata" link, I hope that it encourages users to jump in and contribute if they find one of their favourite performers lacks (or shows incorrect!) information.

You can find the code on the Evergreen contributor git repository.