No tourney next week, so I guess I've gotta do good this time around. Except doing good means actually making a decision on all hands, and since I started late tonight that's not how things went... I sat out the first four hands, including when I was big blind, and entered the game in the small blind with JJ. Oh yeah! I reraised hacker59 to scare him off the blinds, a bit overeager perhaps but a nice start.

8:36 - Even better, pocket kings. Small raise, TequilaMom (love that nick!) calls, and I get a king on the flop. Cool. Check. Unfortunately, a third spade falls on the turn; not only that, but some sick person could also put together a low straight with what's come together. Ah well; a modest raise keeps TequilaMom in, so I'm suspecting that she's hunting for some happier cards. The river offers another straight possibility, but I throw a 1/3 pot value bet at it; TequilaMom reraises to triple that, and I call. Stomach's not feeling great, but it turns out that she was fishing for an ace and my set of kings handles her ace-high with ease. Up to T2060 with my fifth hand of the game... nice!

8:41 - I successfully drop the unsuited hammer, to silence. I must be doing this wrong. Tap, tap... Is this thing on?

8:51 - I'm off my high horse after an ill-fated A8s raise caught middle pair with the eight against the big blind; continuation bets were flat-called by chauski, and when a K on the river dropped (also opening up a flush possibility), we both checked around. chauski showed pocket 9s, and I was back to T1650. Kudos to chauski for sticking to his guns!

9:06 - After folding umpteen times (5-2, A-rag ad nauseum), I pick up a pair of tens and enthusiastically raise to 4xBB. The Subhuman, sitting around T1000 right after me, pushes all in. Hmm... I should fold, I know I should fold, but I can cover it with about T500 to spare, so I call, and he shows the Hiltons. Oww. But the flop shows TJK. Guilt rises in the back of my throat, and neither an A, 9, or Q falls to prevent my massive suckout. I feel so dirty, and yet my stack is much nicer now.

9:12 - Pocket queens, I raise to 4xBB (hmm, curious pattern there), and chauski pushes all-in. Calculation time: I can cover it, I sense aces, but it's still early -- and I call, to see JJ. Karma be damned, as chauski does not improve and he gets sent to the rail. My stack is much nicer now (again).

9:13 - drewspop, after a few nice runs but a bit of bad luck with chauski in the previous hands, is sent packing early again when his pair o' fives (starting hand: 56c) gets straightened out by CawtBluffin (starting hand: A4o).

9:14 - drewspop has been replaced by dsheep, the bovine swine! What a poor replacement. dsheep has been sitting out most of the tournament...

9:24 - After a nice AJh 3xBB raise in EP that won me the blinds, and accusations of being a blind-stealer, I am teleported to Wil's table (along with GRobman, Change100, malice51, thewatcherau, and Golrish89). Many large stacks here.

9:30 - No action for me, we're at the break with the top positions shaking out thusly:

How come 4 of the top ten are at MYtable? Wahh..

9:36 - First post-break hand, Wil at T960 pushes all-in on the button; N1kita calls and barely covers, and its A8o (Wil) versus AQc (N1kita). Uh-oh. Wil is eliminated as PokerStars holds no miracle suckout for him tonight.

9:51 - My complaints have been heard. Dealt pocket jacks, I reraise thewatcherau's 4xBB and the stakes rapidly have me push all in preflop. He flips over tens and I coast in to doubling up (swigging beer nervously all the while) to T7370.

9:59 - Change100 loses most of his stack when his pocket sevens run into malice51's brick wall of aces (which, just for extra effect, turn into a flush).

10:23 - In a severe folding pattern for a long time, with only an occasional steal of the blinds, I hit pocket jacks in EP. thewatcherau jumps in ahead of me with 4xBB, and I come flailing over top with another 1000 in chips. He pushes all in, I call, and his KTo can't make the grade.

10:32 - I've had a HUGE run of picture pairs, suited big slick, and the like (including a successfully played sooted hammer UTG, perhaps in bad taste but you can't argue with the hammer gods) to bring me up to T23000. Unreal, the only thing that brought me down to earth was my pocket aces being hurt by a set of kings. Then I sucked out with KQc vs. ATc when my king paired up and took sparkyedge out of the tournament. In all of the poker I've played, I've never seen anything like this ten minute rush. I could get used to it I suppose

At the break, the standings (with 21 players left) are:

10:47 - We're down to 18 players now, SirFWALGMan got knocked out somehow to bring us down to two tables. Had we had two more players, these would have been paying positions; instead, all the cash is concentrated in the final table. With blinds at 300/600, though, I expect the consolidation to occur quickly. 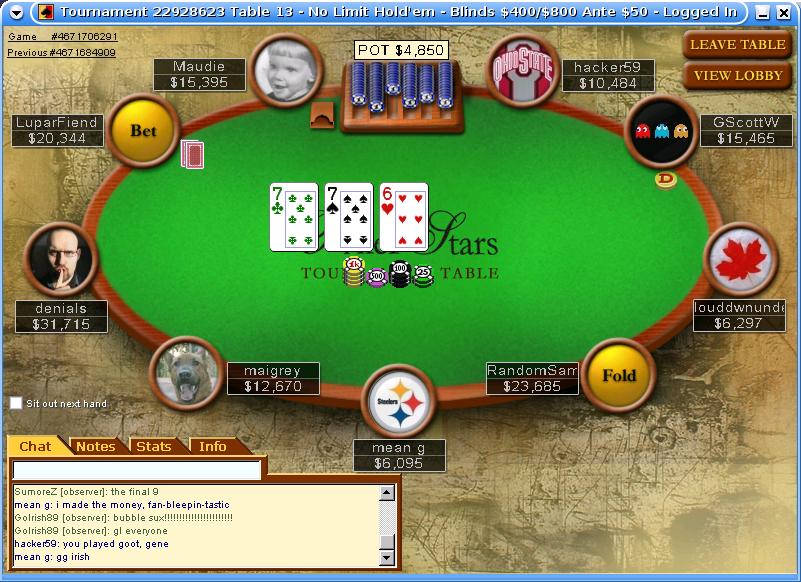 I thought everything was glorious until we revealed our sister-kissing hands!

11:27 - I found a way. The story is long and painful, but it has something to do with doubling up Maudie, then getting most of those chips back from louddwnunder, then giving them right back to louddwnunder. My final hand had me raising KJo against louddwnunder, who pushed me all-in with her pocket sevens. She made the set on the flop and never looked back, meaning that I wound up in fifth place tonight. That's cool, I guess, but I feel like a bit of a chump for giving up that lead built up with the mini-rush of the gods... should have cooled my heels unless I had the nuts and let everybody else grind themselves down. Ah well: three money finishes out of the last five WWdN's makes Dan a pretty happy boy.

11:35 - Congratulations to Maudie, who took the big enchilada; louddwnunder, who came back from being short-stacked at the final table to take second place, and props to GScottW who had enough patience (despite his short stack) to watch several of us frantically annihilate ourselves before he claimed third place. Well played, one and all!